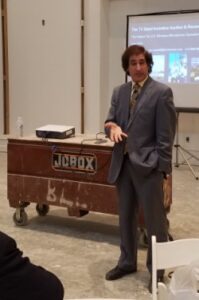 Chapter 37 held this meeting at 6:30 pm, June 14th, in the Ballroom at The Old Post Office Building, 1100 Pennsylvania Avenue NW, Washington, DC 20004. (Black Tie was optional!) We had more bang-for-your-buck with two presentations!

The first was a brief introduction and tour of the Old Post Office rooftop as a possible multiuse communications site.  Located in the heart of downtown DC at a height of 315 feet, this building is among the tallest in the city with a striking view in every direction.  (See photos, below.)  Therefore, it is a premiere site for electronic news gathering receivers and hosts a number of broadcast tenants.  Following a complete overhaul, there will be room for even more.  Our host, Tom Crowley, VP North American Mobile Systems, was on hand to answer any questions.

Secondly, Joe Ciaudelli and Chris Kontopanos from Sennheiser presented A Spectrum Update for Wireless Mic Operators and Other Production Professionals. They discussed:

Joe has been with Sennheiser since 1987 in multiple roles with his current position as Director of US Spectrum Affairs within the Research and Innovation Department. He has also authored the chapter on wireless microphones for the last three editions of the Audio Engineering Society’s Handbook for Sound Engineers.