Live from the Glass-Enclosed Nerve Center
with Many Speakers. See Text! of WTOP Engineering and Contractors
Featuring

We will be meeting at the NEW WTOP studios in Chevy Chase, MD. For access, please enter the building lobby. They will have someone there to escort you to the fifth floor.

WTOP is located at 5425 Wisconsin Avenue in Chevy Chase, directly next door to the Red Line Friendship Heights station's Military Road exit. You should be able to find reasonably priced parking in the garage beneath the building. 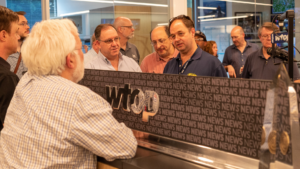 How does major market radio stay relevant and stay in the lead in an era of digital and social media, and video file sharing?  This question was answered by presentations from the WTOP Engineering Departement and their contractors who allowed us to follow the build-out of a modern major market broadcast facility through its design, construction, wiring, integration, switch-on, and move-in stages.  The facility design and planning, network layout, and physical architecture were covered in presentation episodes and a facility tour.

Major market, indeed: WTOP has been the highest billing radio station in the USA for four consecutive years and is now operating in its new "visual media friendly" facility in Chevy Chase, MD, just up the street from its former Idaho Avenue studios in the District. The new WTOP Glass-Enclosed Nerve Center™ was designed from the outset for IP audio and video distribution, and integration of digital and streaming media with the newsroom work flow. This atypical but perhaps new model design for a large-market radio station facility even includes a purpose-built video lab and a visual-friendly event space, specifically to produce social media, streaming, and visual augmentation of its news product, 365 days per year to so many Washingtonians.

Fellowship and a light dinner started about 6:15 pm followed by organization business and presentation shortly thereafter.  Special thanks go to our dinner sponsors by Wheatstone, Diversified, RadioDNA, and Haivision as well as Brian Oliger and our friends at Hubbard Broadcasting for organizing and hosting this event.

As you can see from the photo below, there was extensive interest in this event.  Unfortunately, we had to turn a few members and industry leaders away due to room capacity limitations.  Since our July 2019 meeting will also be held at WTOP, you may have another chance to get a glance of fine facilities!