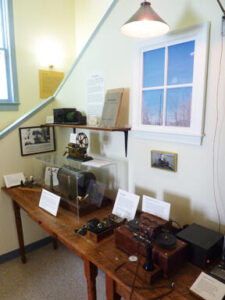 Those of us interested in broadcasting and audio are fortunate to have a world-class broadcast museum right in our back yard. The National Capital Radio and Television Museum (NCRTV Museum), which is housed in a fully-restored turn-of-the-century building owned by the City of Bowie, is one of the most comprehensive collections of historic radios and televisions in the United States. The NCRTV Museum exists to preserve electronic media and foster an understanding of its impact on technology's future. Exhibits include radio and television receivers of various vintages as well as a 1940s AM radio station transmitter.

The NCRTV Museum hosted a November 14 joint meeting of the Washington and Baltimore SBE chapters as well as the Audio Engineering Society (DC Section). The museum provided docents to escort our group through the facility while shedding light on the museum collection from a uniquely tech-savvy perspective.

We met in the annex at the museum site (a small garage just adjacent to the museum), enjoyed the opportunity to meet one another, and had a bite to eat starting about 6:30 pm.  We had brief business meetings for each of our respective organizations about 7:00 pm, and began the tours shortly thereafter.