SBE Picnic!
with You!
Sponsors 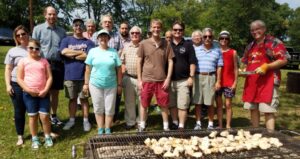 The annual SBE Chapter 37 picnic is an opportunity for members and friends to meet with broadcast engineering friends, spouses and families. We got together, told "war stories," played a few games, toured the WTOP transmitter site, and dined on delicious food. We also elected two new Chapter 37 officers. (There's more on that below.)

Many thanks to our sponsors Jim Peck of SCMS, Paul Fitts and Owen Garland of Vertical Technology Services, and Chris Crump of Comrex for their support. Thanks also to Brian Oliger and the folks at WTOP for helping to make arrangements and for hosting the picnic at the WFED AM 1500 transmitter site this year!

This was a new location for the SBE picnic, which had been held for many years at the WMAL transmitter site.  Following the picnic, WMAL Engineering Manager Mike Benonis  escorted a few folks to the WMAL site to see the facility just a few days before it was dismantled.

We greatly appreciate the volunteers who helped us with setup, cooking, and cleanup.  Much work was done by many, from the WTOP crew who hosted and facilitated, to Chef Jim Peck, to the many attendees who lent a hand.  We're thankful for your help.

As mentioned earlier, an election was held for two open Chapter 37 board positions.  The process concluded with Fred Willard and Dan Ryson becoming officers, joining Kent Kramer and Brian Oliger on the board.  Specific roles will be determined during a board meeting which was scheduled following the picnic.