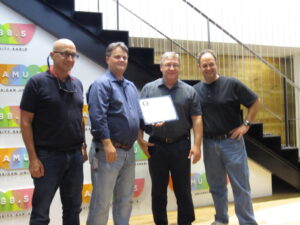 In prior SBE meetings, we have covered topics on studio production, broadcast transmission, and even the microwave links in between.  However, we rarely have the opportunity to talk about the care and feeding of the tall broadcast towers that (quite literally) support the broadcasting industry.  All of that changed in July, when we had the opportunity to learn from Vertical Technology Services LLC (VTS), a local firm that builds and maintains towers throughout and beyond the Mid Atlantic region.

This timely meeting was scheduled at the onset of the digital television repack.  With almost 1,000 television stations changing channels over the next three years, an unprecedented amount of tower work will be needed as many huge antennas and/or transmission lines must be replaced in a very brief period of time.  This may be the most challenging project ever faced by the tower and broadcast engineering industries.

Paul Fitts and the VTS crew discussed tower safety and the new EIA/TIA and ANSI Standards. They also had a short PowerPoint that illustrated repack challenges and difficulties that many of us will face during the transition. Attendees also brought many questions, concerns, and observations.

Paul Fitts is the VTS Chief Executive Officer and Owen Garland is the VTS Chief Operations Officer. Collectively, these two guys have over four decades of experience in the tower business. We look forward to learning a bit about their interesting careers and their views regarding the repack.