Our February 9th guest speaker was Michael Guthrie, a premiere Harmonic ATSC Technology Specialist who has been with the company for over 20 years. He has over 35 years' experience in the broadcast industry in engineering, product management, sales and marketing in numerous companies including ABC Television, Solid State Logic, McCurdy Radio, Telex Communications, DiviCom, and Harmonic. Michael joined DiviCom (DiviCom was acquired by Harmonic in 2000) as an ATSC evangelist. Since then, he has worked with customers on Broadcast, Satellite Distribution, Direct to Home Satellite, Telco IPTV, and Over the Top Internet Video projects.

ATSC 3.0 is a hot topic. But often absent from this discussion are the ATSC 1.0 requirements that enable the ATSC 3.0 transition. The average lifespan of a television in the US is about 7 years while the average household has 2.3 televisions. At what point will stations be willing to disenfranchise TVs that don't have ATSC 3.0 capabilities? The major cable TV and Satellite TV providers will adapt to ATSC 3.0, but what about the small cable systems? Most stations feed several MVPD's, often several are "Mom & Pop" small systems. These smaller systems may rely on MPEG 2 for many years.

As the excellent turnout suggests, the topic and speaker were a big hit.  We were delighted to see so many attendees, including twenty folks who are new to our Chapter.  We hope everyone enjoyed the meeting.  Michael and Harmonic kindly provided a copy of their presentation for your reference and those who couldn't attend.  Please see the link below.

Thanks to sponsors Paul Fitts and Owen Garland of Vertical Technology Services, LLC for their ongoing financial support of Chapter 37's recent Zoom sessions and other technical support costs. 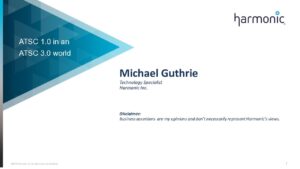