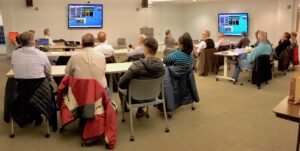 Who: Joop Beunders and Rich Rarey
From: MacBe bv
What: FM RBDS Measurement and Diagnostics
When: March 13, 2018 6:00 PM

Historically, some of our best meetings stem from suggestions made by Chapter 37 "regulars" regarding unique topics not normally discussed at SBE meetings.  Our March 13th meeting was suggested by our own Rich Rarey, General Manager of Rareworks LLC, who was one of our guest speakers.  The topic related to the reception and detailed monitoring of FM RDBS signals, something that is rarely, if ever, discussed at SBE meetings.

Radio Broadcast Data System (RBDS) is the FM-subcarrier based data broadcasting system commonly utilized by radio stations for the display of station call sign, title, artist, traffic data, and potentially much, much more - on compatible FM radios.  RBDS was established in the United States by the National Radio Systems Committee and was largely based on the European Broadcasting Union's Radio Data System (RDS) standard that was established more than three decades ago.  These systems will be collectively referred to as R(B)DS below.

Efforts are now underway to update and enhance this technology as RDS2. In short, RDS2 adds up to three extra RDS carriers, giving the overall system greater bandwidth to support practical transmission of graphics such as album covers, station logos, and advertisements.  The first public demonstration of RDS2 utilized reception equipment developed by our other guest speaker, Joop Beunders, General Manager of MacBe bv of the Netherlands, who joined us via VoIP and TeamViewer.

In order to verify that a radio station is broadcasting R(B)DS data features according to the specifications, a "reference receiver" like MacBe's small, powerful, and portable RX014 is required. During the meeting, Joop and Rich discussed the reception and detailed monitoring of R(B)DS signals and data.  Additionally, they utilized the RX014 test and diagnostic tool to analyze R(B)DS characteristics of live radio station signals here in Washington.  We also peered into Joop's RX014 receiver in the Netherlands to see it in action.  Joop also covered RDS2 technology and its benefits.

Joop Benders has spent more than four-decades developing, supporting, and inventing features utilized in automotive and portable receivers.  While working at Philips Semiconductors, he invented digital search tuning and hand-crafted an integrated circuit that incorporated this feature.  He was also occupied with the Station and Program Identification (SPI) system - the predecessor of RDS.  Subsequent efforts with Philips and Catena (both the Netherlands) focused on building control programs for radio receiver chips, designing algorithms to improve overall radio quality, and perfecting RDS activities and behavior.  Since 2014, Joop developed three R(B)DS products for MacBe bv, his own company.

Rich Rarey is the general manager and founder of Rareworks LLC. He enjoys building the things that improve lives and connect us to each other. You will find him designing technology that helps at-risk populations, including emergency alerting systems and drone applications for search and rescue missions. His current work with Tome, Inc. is in Smart Cities and B2V safety.  Before founding Rareworks, Rich spent much of his career at NPR and NPR Labs.  His papers and articles have been published in the NAB Engineering Handbook, 11th Edition and in Radio World magazine.  Rich is a proud graduate of Ohio University and an OU Marching 110 alumnus.

We met at 6:00 pm for a light dinner and visit. The formal meeting began about 6:30 pm.  This month's dinner sponsor was SBE Chapter 37.