FM Stereo: The History of the Making of a Standard
with Richard W. Burden of Burden Associates
Featuring 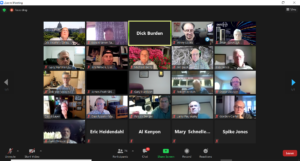 Who: Richard W. Burden
From: Burden Associates
What: FM Stereo: The History of the Making of a Standard
When: June 1, 2021 at 6:30 PM
Sponsor: Broadcast Depot

Since FM stereo broadcasting has existed for virtually all of our adult lives, some may take it for granted.  However, that would never happen to Richard W. Burden, one of the pioneering engineers instrumental in bringing stereophonic FM to the public.  Richard Burden was our June 1st guest speaker.

According to broadcast historians, the first FCC-approved stereo broadcasts began at WGFM Schenectady, NY and WEFM Chicago, IL on June 1st, 1961 at 12:01 AM local time.  We are held our meeting exactly 60-years later to commemorate this event.  Though the milestone dates are important, the process of establishing the worldwide FM stereo standard is far more interesting and began much earlier.  Richard participated in this endeavor and prepared his first-hand experiences.

Richard Burden, Principal of Burden Associates, has been a broadcast engineer for over 70 years.  In addition to his efforts with FM Stereo, he is known as the father of the Travelers Information Service, which provides information to motorists at airports, highways, national parks and communities. Richard is a Fellow in the Society of Broadcast Engineers and has been honored by the Society with the Lifetime Achievement Award.  He is a Fellow in the Audio Engineering Society (AES), which honored him as one of the 25 internationally known engineers who contributed significantly to the science of audio.

With widespread interest in this topic, particularly in central New York; Chicago, and Pittsburgh, PA, we invited SBE members in those and other regions to join us via Zoom.  We also invited the Washington, DC SMPTE and AES sections.

Special thanks to Broadcasters Depot for sponsoring the video conference and other technical support costs of Chapter 37.