Parking: There is plenty of parking located outside the base gate; therefore no security entrance issues. 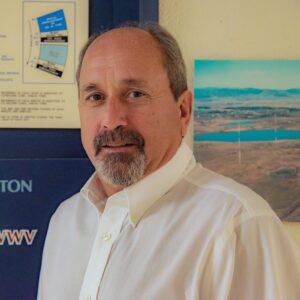 John Lowe, who served as Broadcast Manager for the National Institute of Standards and Technology (NIST) radio stations WWV, WWVH and WWVB in Colorado and Hawaii, will present a program on the history and operation of these very unusual — and very essential — shortwave and low frequency radio broadcast services. In his presentation "NBS/NIST Radio Station WWV - The Story of an Old Timer" Lowe will provide a history of the WWV operation, along with other stories and information about this "ground zero" source for ensuring the accuracy of the nation’s clocks and all other devices requiring a stable and highly-accurate reference source.

Lowe recently retired after a 34-year career with the Time and Frequency Division of the National Institute of Standards and Technology (NIST) and its precursor organization, the Nation Bureau of Standards (NBS) in Boulder, Colorado. He initially served in the organization's Atomic Standards Group, where it participated in constructing the National Frequency Reference (NIST-7). Lowe was awarded the Department of Commerce's Gold Medal for his efforts in connection with this initiative. He was assigned to head up NIST's Time and Frequency Services in 1995 and served in this position until his retirement in 2019. He served as Broadcast Manager for NIST radio stations, WWV, WWVH and WWVB, overseeing their operation, maintenance and enhancements. Lowe now serves NIST as Scientist Emeritus, representing that organization in several national and international bodies. He holds a bachelor’s degree in electrical engineering from the University of Missouri at Kansas City, and a masters in electrical engineering from the University of Colorado.

Light dinner will be served (sponsored by AIMM).

The Visitors Center will be open with docents on duty for technical information on exhibits from 6 pm to 9 pm. So plan to come early and check out the latest fascinating Earth Science displays and the outdoor rocket garden. Doors open at 6 pm. Organization business and a few introductory words starting at 6:30 pm in the auditorium. Program starts at 7 pm. Special thanks to the GARC and NASA Goddard for manning the visitors center for this event. This will be an official Goddard public affairs event listed in their weekly announcement magazine. Exhibits will stay open until 9 pm for those that want to peruse after Johnny's presentation.

Plenty of parking. Visitors Center is located outside the base gate; no security entrance issues.

We ask you to Register Here in order to judge amount of food needed to bring. SBE or SMPTE membership not required. Just interest in the technology, RF transmission, timing, amateur radio, or technical history.

This will be the first in person evening SBE 37 meeting in almost three years. Will also be simulcast virtually on zoom with the SBE "OWL" camera.