NAB's New Headquarters is located on the SE corner of M and South Capitol Streets Southeast near Nationals Park.

Paid street parking is available nearby.  Several parking garages are located in the area including one operated by Colonial Parking in the NAB Headquarters building that is accessible from Van St SE.  The entrance to the NAB garage closes at 7:00 pm but those already parked can exit any time.

The nearest Metro stop is Navy Yard on the Green Line.  The NAB HQ building is only 400 feet away from the Metro station's "M Street" Entrance. 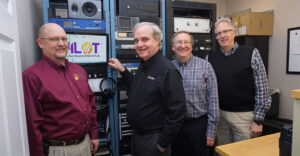 Our February 15th, 2023 guest speakers will be David Layer, Vice President, Advanced Engineering in the National Association of Broadcasters (NAB) Technology Department; Russ Mundschenk, retired Xperi Field Test Manager; and Mike Rhodes, Senior Engineer, Cavell, Mertz and Associates, Inc. This in-person meeting will be held at the new NAB headquarters building at 1 M Street SE, Washington, DC near Nationals Park. We ask you to Register Here and let us know whether you're attending in-person or via Zoom so we can make the necessary arrangements.

The meeting will focus on the radio test bed that NAB PILOT (NAB's innovation initiative) originally developed in 2014 to test the all-digital AM HD Radio transmission mode.  NAB, Xperi (then DTS), and Cavell Mertz collaborated on test bed design.  The construction was completed by Cavell Mertz.  About that time, David hosted an SBE Chapter 37 meeting that provided an overview of PILOT's all-digital HD Radio lab and field testing.  Since then, the FCC has authorized all-digital AM broadcasting and NAB Technology has focused on other broadcasting innovations that required test bed upgrades and improvements.  We'll have a chance to see the test bed in person and perhaps learn a bit about what NAB Technology is working on today.

David has been with NAB since 1995, and has been very active in the radio technology and standards setting area. He is the primary NAB staff person on NAB’s Radio Technology Committee and the National Radio Systems Committee (NRSC), a technical standards setting body co-sponsored by NAB and the Consumer Electronics Association (CEA).  David’s principal responsibilities include serving as a project manager for technology projects being conducted by PILOT and as principal administrator of the NAB Radio Technology Committee, a group of technical executives from NAB member companies that advises NAB on technology development and technical regulatory matters.

David was the recipient of Radio World’s 2015 Excellence in Engineering Award and was recognized by Radio Ink magazine in November 2010 as among the top ten best engineers in radio. In 2014 David received the Consumer Electronics Association Technology Leadership Award. The IEEE BTS awarded David the Matti Siukola Memorial Award for Best Paper at both the 2014 and 2018 IEEE Broadcast Symposia.

Russ was the recipient of Radio World's Excellence in Engineering Award in 2018.  His broadcast engineering work for Xperi advanced digital radio in the United States and other countries.  Russ' 47-year professional career traced throuigh Xperi predecessor companies USA Digital Radio (USADR), iBiquity, and DTS.  Prior to joining that team, he was the Chief Engineer for radio station WBEB (B101) Philadelphia, one of the first stations in the country to fully embrace digital technology, including digital consoles as well as AES/EBU signal distribution.

Michael D. Rhodes, P.E. is a Senior Engineer at Cavell Mertz who works on detailed broadcast station allocation, coverage and interference analysis, and the development of custom computer software programs to support these studies. In addition to broadcasting, other projects have included work with the Intelligence Community as a fully cleared subject matter expert in Full Motion Video, motion imagery, and image quality, as well as government and private sector work with various public safety and land-mobile radio systems, satellite radio interference prediction, in-building communications systems, and other wireless communications projects.

Special thanks to Cavell, Mertz and Associates, Inc. for picking up our light dinner tab. We look forward to seeing you soon, either in person or via Zoom!