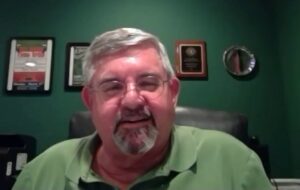 Chris Imlay, an SBE Fellow and SBE's General Counsel, was our guest speaker on Wednesday, May 12th.  Chris' annual presentation has become a tradition at Chapter 37.  This was his seventh consecutive visit since 2015 so we're contacting Guinness to see if this qualfies as a World Record.

Those who attended any of his meetings can attest that Mr. Imlay is a superb public speaker who always has something interesting on his mind.  Thus, we again gave him carte blanche regarding discussion topics.  He brought us up-to-date on SBE advocacy policy, spectrum allocation trends including 2 GHz commercial space launch allocations, 2 GHz EESS, wireless microphone frequencies, 6.5 and 7 GHz, land mobile interference from DTV, as well as the C-Band auction and related rebanding efforts.  As always, the presentation was both interesting and informative.

Along with input from various SBE committees and the SBE Executive Board, Chris represents SBE's interests before the FCC and other government agencies and has done so for many years.  He also keeps us informed with his Legal Perspective article in the SBE publication The Signal and his annual presentations before Chapter 37 since 2015.

Special thanks to Broadcasters Depot for sponsoring the video conference and other technical support costs of Chapter 37.