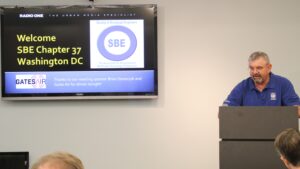 Who: Chris Imlay
From: Booth, Freret & Imlay, LLC
What: Rules, Regs, and the Broadcast Engineer
When: May 13, 2020 6:30 PM
Sponsor: Broadcasters General Store

Chris Imlay, SBE's General Counsel, was our guest speaker on Wednesday, May 13th.  We were able to participate in this virtual meeting by Zoom teleconference sponsored by Mary Schnelle and our friends from Broadcasters General Store.

Along with input from various SBE committees and the SBE Executive Board, Chris represents SBE's interests before the FCC and other government agencies and has done so for many years.  He also keeps us informed with his Legal Perspective article in the SBE publication The Signal and his annual presentations before Chapter 37 since 2015.

As those who attended his prior meetings can attest, Mr. Imlay is a superb public speaker who always seems to have something interesting on his mind.  Such was the case again this month, as Chris brought us up-to-date on current technical regulatory topics, spectrum allocations, and broadcast auxiliary spectrum issues.  We also had a retrospective discussion about Mr. Imlay's early years and the "spark" that began his career as a communications attorney.  We found the presentation both interesting and informative.

For the history books:  This was our first ever virtual meeting.  Although the tragic COVID-19 pandemic's requirement for "social distancing" created some new obstacales, the Internet-based meeting eliminated others - including distance and travel challenges.  As a consequence, we were able to meet many first-time SBE Chapter 37 attendees as well as members of other chapters and quite a few old friends who now live hundreds or thousands of miles away.  We're thankful to Chris Imlay's for his generous time and to Mary Schnelle and our friends at Broadcasters General Store for sponsoring the technical bits.