SBE Chapter 37 Picnic
with You
Sponsors 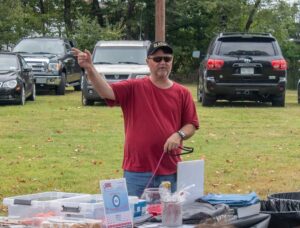 The SBE Chapter 37 picnic was an opportunity for us all to meet with broadcast engineering friends, spouses and families. We got together, told "war stories," and dined on delicious food.  Jim Peck of SCMS provided numerous nifty prizes that were awarded in drawings across the afternoon, including an AKG microphone , SHURE Sound Isolating earphones, along with T-shirts and SWAG from various vendors.  For the second year in a row, SBE member John Reiser donated a copy of the NAB Engineering Handbook which was also given as a door prize.  Tours of the Telos Alliance van and WFED transmitter site took place throughout the afternoon.

We also had an election for new Chapter 37 officers.  Eric Hoehn, who has served the Chapter for many years as the EAS and Certification guru, was nominated and voted into office.  Prior to the meeting, Brian Oliger welcomed some of Eric's EAS responsibilities, which facilitated this change.

Many thanks to sponsors Jim Peck of SCMS as well as Paul Fitts and Owen Garland of Vertical Technology Services for their support.  Thanks also to Brian Oliger, Dave Kolesar, and the folks at WTOP for hosting the picnic at the WFED AM 1500 transmitter site once again.  We're also thankful to the army of volunteer helpers who helped throughout the day with setup, cooking, and/or cleanup.  As is commonly said, "Many hands make light work!"