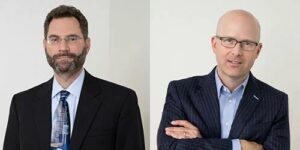 Who: Stephen Hartzell and Coe Ramsey
From: Brooks, Pierce, McLendon, Humphrey & Leonard, LLP
What: SBE Regulatory Issues and You!
When: May 10, 2022 at 6:30 PM
Sponsor: Jim Pack of SCMS Inc.

The SBE is an advocate for its members on regulatory and legislative issues at the FCC, NTIA, Capitol Hill, and beyond that affect broadcast engineers.  The Society's focus on these issues is driven by the SBE Board, Government Relations Committee, General Counsel, as well as interested members like you.

In the continuing effort to keep you informed, our May meeting will introduce SBE's new Regulatory Counsel team consisting of Stephen Hartzell and Coe Ramsey of Brooks, Pierce, McLendon, Humphrey & Leonard, LLP (Brooks Pierce).  Brooks Pierce is a Raleigh, NC based law firm that serves businesses, government, non-profit institutions, trade associations and individuals.  As outlined below, Stephen and Coe are both highly experienced with broadcast technical regulatory issues including Broadcast Auxiliary Services.  We look forward to a dialog regarding SBE's current legislative issues (detailed here).

Since Stephen and Coe call the Raleigh-Durham area "home," this will be a joint meeting of SBE Chapters 37 (Washington) and 93 (Raleigh-Durham). Chapters 60 (Richmond) and 54 (Hampton Roads) will also be joining us. As usual, we'll keep introductions and the business portion of the meeting brief.

As an FCC and communications lawyer, Stephen Hartzell advises broadcasters and other FCC-regulated businesses on a host of compliance matters. He maintains productive relationships with members of the FCC staff. His practice focuses on providing operational advice, including FCC licensing, enforcement issues, EAS, political programming, sponsorship identification/payola, the FCC’s EEO rules, broadcast station ownership, closed captioning and other accessibility issues, children’s television programming, and indecency and other programming content issues.

Special thanks to sponsor Jim Peck of SCMS for sponsoring the video conference and other technical support costs of Chapter 37.  We look forward to (virtually) seeing you soon!