ATSC 3.0 is a subject much in the news today.  Our July meeting highlighted an important anticipated milestone in the format’s implementation with plans to initiate ATSC 3.0 broadcasting in U.S. market number ONE: New York City.  (More here.)

Guest speaker Skip Pizzi, Senior Consultant to Public Media Venture Group, presented an overview of the ATSC 3.0 format's advantages, discuss progress in its adoption worldwide, and provide first-hand knowledge of the building and stumbling blocks in launching the new television broadcast format. Skip's presentation (attached) outlined the "lighthouse" model being used in most markets to transition from ATSC 1.0 to 3.0.  He then focused on a unique approach to be used by The WNET Group in the NYC transition (for which he is Project Manager) that could offer some advantages over the traditional model.

A major effort is now underway to launch NextGen TV service (the consumer-facing name for ATSC 3.0) in New York City and surrounding areas - the largest television market in the country encompassing approximately 7.45 million TV households - according to Nielsen. The WNET Group's WLIW(TV) ("WLIW21") will serve as the host station for ATSC 3.0 broadcasts for PBS (and possibly other) content in the New York metropolitan area.  (More here.)

In preparation for its NextGen TV debut, WLIW21 has completed extensive engineering testing and operational planning, relocated its transmission facilities to One World Trade Center in lower Manhattan, installed a new transmitter and related equipment, and upgraded the station's physical plant. As with any launch of ATSC 3.0 service, the transition is subject to FCC approval.  The WNET Group will make a separate announcement upon the launch of the NextGen TV service.

This meeting was brought to you by SBE Chapter 15, New York City and SBE Chapter 37, Washington DC.  We appreciate the cooperation.  Special thanks to sponsor Jim Peck of SCMS for sponsoring the video conference and other technical support costs.

Due to the widespread interest of this topic, the presentation was held twice - once during the day and again in the evening.  We were delighted to see many familiar and new faces in attendance from these organizations: 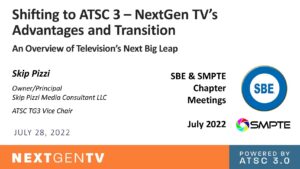