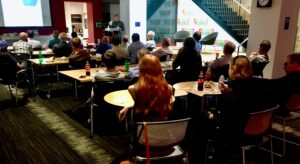 During our July 2018 meeting, we were fortunate to have two broadcast veterans updating us on transmission technology. Perry Priestly has been a leader in broadcast technology for 40 years and is now CEO of Anywave Communications. Owen Garland, CEO of Vertical Technology Services, has over 30 years of experience erecting and modifying broadcast towers.

Our meeting began with Perry Priestly's presentation. Anywave's roots go back to the development of the present standard Zenith Grand Alliance ATSC 1.0 TV receiver system. Perry has considerable experience in TV and radio transmission systems from his time with Philips, Pye-TVT, Comark Communications / Thales broadcast, Linear Industries, Ibiquity Digital, and EEV amplifiers. Anywave Communications is now focused on the manufacture and sale of delivery and distribution broadcast equipment, including large-scale high-power DTV transmitters of both the air and water-cooled variety. Anywave is also a manufacturer of exciters, modulators, encoders, processors, analyzers, repeaters, gap fillers, filters, and various “gadgets” for the retrofitting and monitoring of transmitter site functions. Several Anywave components can be found (re-branded) in other big-name manufacturers’ products.

Perry provided an update on existing and upcoming ATSC 3.0 transmission projects in the USA, Korea, and other budding countries who are adopting the standard. Lessons learned in the build out, the outstanding performance and efficiency capabilities, the two-way data path, the state of acceptance, facets of the standard, and compatibility with existing facilities were all covered in the presentation. Perry also showed some hands-on pieces of hardware.

To complement the new technology portion of our meeting, Owen Garland, CEO of Vertical Technology Services, provided an update on the DTV buildout. It is commonly known that the FCC mandated TV transmission repack project has been a strain on the nation’s limited number of tall-tower qualified tower crews. Phase 4 of the buildout, which affects most of the Northeast USA and our market, is just around the corner—with a deadline of just a bit over twelve months from today.

What is sometimes neglected or overlooked in planning the erection, modification, and removal of these high power television transmission systems and towers is the cost and potential impact to FM transmission systems that often share a common tower with TV broadcasters. Owen highlighted methods to alleviate, schedule around, and mitigate potential revenue loss to FM stations that depend more heavily on their broadcast antennas than TV as a percentage of their total audience.

Sandwiches, chips, cookies and soft drinks were kindly provided by Anywave Communications about 6:30 PM.  We discussed a tiny bit of Chapter 37 business about 6:45 PM and began our presentations shortly thereafter.  Thanks to our friends at WAMU for kindly allowing us to utilize their facility.