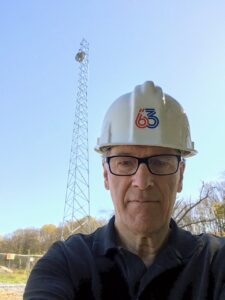 Our November 24th meeting was a very timely presentation from our own Dave Sproul.  His topic was:

The Beginning, In Between, and End Phases of WMAL's Greentree Road, Bethesda Transmitter Site, Bookended by Details of My Personal Career

As many heard from local news reports, WMAL's four, 400-foot tall towers were demolished Wednesday, November 4, 2020 after more than seven continuous decades of service.  Dave's presentation chronicled WMAL's legendary operation largely from his perspective.  As shown in his bio (below), he was there!  Last but not least, Dave generously shared a glimpse into his present life along with his post-retirement pasttimes and passions.

We were delighted to see many in attendance who lived similar histories at other legendary Washington, DC stations and media facilities.  Also present were beloved regular members and visitors, both local and distant.  We were happy to see everyone.

Thanks to sponsors Paul Fitts and Owen Garland of Vertical Technology Services for their financial support of Chapter 37's recent Zoom sessions and other technical support costs during the last few months.