Terry Baun, SBE Fellow and Past President, Dies at 74

Known to all as Terry, his broadcast career in 1967 at Milwaukee’s classical music station, WFMR-FM. After ten years there, he began a series of moves into corporate engineering, while also forming his own consulting firm, Criterion Broadcast Services, in Milwaukee. 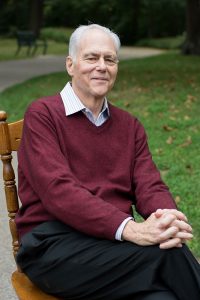 Through the years, he has worked for Sudbrink Broadcasting, Multimedia Broadcasting and Cumulus Broadcasting. He completed his broadcasting career working for the Wisconsin Educational Communications Board, where he oversaw the engineering and operations of the delivery system for Wisconsin Public Radio & Television throughout the state of Wisconsin, retiring in 2017 after 10 years. He is a graduate of Marquette University.

Terry’s activity in the Society of Broadcast Engineers began in 1976 when he first joined the Society and became involved in Chapter 28 of Milwaukee, serving in several leadership capacities. Later in his career, while living in Indiana, he served as Certification Committee chair for Chapter 25 in Indianapolis.

Terry’s contributions to the SBE at the national level have been many and significant. He was first elected to the national SBE Board of Directors in 1987, serving a two-year term and was elected to a three-year term in 1991. That term was interrupted after two years as he was elected national vice president in the fall of 1993. Terry served in that position for two years before being elected to two consecutive terms as national president, beginning in 1995. 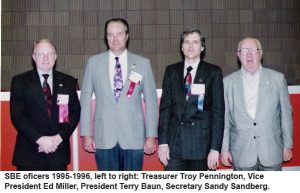 During his terms as national president, the Society instituted the Leadership Development Course. Terry worked to develop stronger ties and awareness of the SBE by the state broadcaster associations nationwide; he initiated a significant upgrade of the Society’s national office data management capability. The Society successfully transitioned from the multi-association World Media Expo, which ended in 1996, to the SBE National Meeting concept that the SBE still uses today. The SBE self-published the EAS Primer, written by fellow Wisconsinite Leonard Charles, during his term and the Society held its first strategic planning meeting during Terry’s presidency. During his two years as president, SBE membership grew as did the SBE’s financial strength.

Terry was been a member of the SBE national Certification Committee for 21 years, from 1998 to 2019, serving as the committee chair for three of those years.

Terry joined the SBE in 1976. He was named the SBE’s Broadcast Engineer of the Year in 1991, the very first time the award was presented. He was named an SBE Fellow in 1999, and in 2003 Terry was awarded the SBE Educator of the Year award, recognizing his many contributions in support of professional development for the broadcast engineer. He holds the Certified Professional Broadcast Engineer, AM Directional Specialist and Certified Broadcast Networking Technologist certifications from the SBE. In 2010, Terry was awarded the SBE’s John H. Battison Award for Lifetime Achievement.

Terry has also contributed much to his home-state via the Wisconsin Broadcasters Association. He was one of the original members of the WBA Summer Engineering Conference Steering Committee. Terry founded the WBA Media Technology Institute in 2011.

He played a key role in developing the self-inspection program within the broadcast industry and is considered a leader in this field. Terry was one of the architects of the Wisconsin Broadcasters Association’s Alternative Broadcast Station Inspection Program, serving as the WBA’s chief inspector for more than ten years, beginning with the program’s inauguration in 1995. In addition to Wisconsin, he conducted Alternative Station Inspections for broadcast associations in Indiana, Michigan and Ohio. As an inspector himself, Terry took on the primary role of mentor with stations to help them with their compliance issues rather than the role of an enforcer. His desire was to have stations comply with the rules, rather than simply looking for reasons to cite them for noncompliance.

In 2000, Terry initiated the 24-hour Hotline for engineers in the state of Wisconsin through the WBA, which he manned 24 hours a day, seven days a week. Based on his program model, other state broadcast associations have adopted the 24-hour engineering hotline. For all of his efforts in the State of Wisconsin, Terry was inducted into the Wisconsin Broadcasters Association Foundation Hall of Fame in 2004.

In his position with the Wisconsin Educational Communications Board, Terry played a key role in guiding the transition of Wisconsin Public Television to full digital broadcasting. In addition to his duties associated with ECB and Wisconsin Public Television, he spent a good deal of time working with the Wisconsin Broadcasters Association in a variety of activities that not only benefited the ECB and WPT, but the entire television community. The WPT transition included the early cutover to digital for WPT’s six translators, and included coordinating a triage plan with WPT programming staff for the five full-power transmitters in advance of the original Feb. 17, 2009, shut-off date.

Terry implemented the planning process with ECB staff for the next generation of the Broadcast Interconnect which delivers Wisconsin Public Radio, Wisconsin Public Television, EAS and Amber Alert programming throughout the state.

He serves as a role model and has worked diligently on the “partnership” model between the ECB and the University of Wisconsin Public Radio and Television issues.

Terry implemented a “paperless” reporting system for engineering updates from field staff – a system that allows ECB engineering staff from throughout the state to have a “snapshot” of projects and issues at each site. Projects that Terry oversaw included the WHHI Tower, the WHAA-FM – Coloma Radio project; the University of Wisconsin System built in 2011, and the Chilton Gap Filler tower – a joint project with the Wisconsin Department of Transportation. Terry also watched over the HD Radio installations at ECB’s FM stations.

Terry also penned many contributions to publications. His articles have appeared in Milwaukee Magazine, Radio World, Broadcast Engineering and the Milwaukee Press Club Annual. He also co-authored a chapter on Facilities Documentation in an edition of the NAB Engineering Handbook and applied for a patent on an Internet media streaming delivery system.

Besides his long membership with the SBE, Terry was a member of the Audio Engineering Society, the Association of Federal Communications Consulting Engineers, and the IEEE. He also served on the Milwaukee Area Technical College Broadcast Communications Engineer Advisory Committee, which revamped the curriculum and brought the lab and studio equipment up to current broadcast standards.

His dedication to broadcasting in general and broadcast engineering, the SBE, the WBA and his employers, are clearly evident. What differentiates Terry from other exceptional engineers is his ability to share his engineering expertise with industry peers as a great communicator teacher.

In the WBA video tribute to Terry earning his 2004 honor in the Wisconsin Broadcasting Hall of Fame. (Watch video.) Terry shared his thoughts on broadcast engineering and his career: “Engineers are a critical part of the broadcasting enterprise. They’re technologists who bring broadcasting to life. I’ve always thought of myself as a broadcaster. Period. And within the scope of broadcasting, I feel that my contributions have been primarily in the technical side, the engineering side.

“My career: Something involved with technology, and also involved with helping other people learn about technology to help their careers move along. I guess the educational aspect of what I’m doing is probably going to be my proudest moment when it’s all said and done.”

Terry’s life was more than broadcast engineering. In September 2002, Terry married Linda Godby. When they married, he was inducted into his most challenging role: that of being a father to Leslie and Stacey. Terry would say, “You have a father and I respect that. I am here for you in any capacity that you need, and I am not going anywhere.”

Terry has said one of his proudest moments was when both daughters asked HIM to be beside them and walk them down the aisle on their wedding days. Leslie (Wood) has three children: Cayleigh, Logan and Hunter. Stacey (Overman) is married to Nick Overman. They have two children: Grayson and Amiah.

Terry loved trains, classical music, Fleetwood Mac, and of course the Beatles. He was mortified when Stacey asked him what a Beatle was. He loved the Packers, but also loved to talk to Leslie on Sunday and discuss the games that the Colts and the Packers played that day.

Terry enjoyed reading to his grandchildren and playing trains with Grayson. He watched his fair share of Dora, Vampirina, Thomas the Train, and Curious George. Even though he didn’t get to ride the tea cups, Terry enjoyed going to Disney with all the family. Terry, being the avid reader that he is, read many books and watched a biopic on Walt Disney. He surmised, though flawed as we all are, that Walt was a genius but not sure he would have appreciated where his world is today.

The post Terry Baun, SBE Fellow and Past President, Dies at 74 appeared first on The Society of Broadcast Engineers.